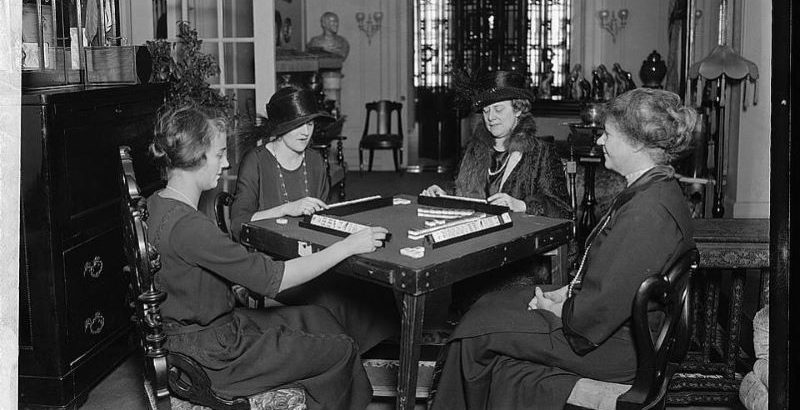 A Brief History Lesson on Mahjong. A Game Played for Thousands of Years. Read more below!

The game of mahjong is almost uniquely identifiable with the Chinese culture. The cliches run amok with chatty housewives playing the game, triad members gambling in mahjong houses, or senior citizens chasing away the hours with a game that stimulates their mind.

But the stereotypes have one thing right. It’s a game that is enjoyed by all people and amongst different age groups. Moreover, it has also been able to spread worldwide. So when exactly did this iconic Chinese game come about and how did it travel half way around the globe to reach the living rooms of the Western world?

The Origin of Mahjong – Antique China

There are many myths regarding when and how the mahjong game was invented. Stories say that the game dates back more than 2000 years ago when a princess invented the game in the royal courtyard. She invited three of her maids to play and that’s why the game consists of four players.

Others say that it was the philosopher Confucius who invented the tiled game. For sure, folklore has glorified the origin of mahjong but the fact remains that no records of mahjong existed until the mid 19th century. The truth is that a great debate still rages on for who to attribute this stimulating past time.

Perhaps mahjong was derived from a card game, or soldiers dreamt up the diversion to occupy their time, or the game was invented by ivory carvers. Whatever the origin, merchants saw fit to talk up its history to increase mahjong sales.

Modernization and Standardization of Mahjong

Mahjong was introduced to the United States in the 1920s by an American living in China, Joseph Park Babcock. He wrote a book which simplified the intricate rules of mahjong and the game became wildly popular. Mahjong sets were flying off the shelves during this craze with mahjong sales outstripping imports of silk, lace, tea, and other goods from China.

The mahjong game met with the same success in Britain and Japan with each country adopting new rules and adding other nuances to the game. And with the spread of mahjong to other countries, more changes were incorporated. That’s why today, there are lots of variants of mahjong play.

No matter the variation, players agree that mahjong is the perfect game of skill and chance. It is also a mental battle with your opponents but probably over light banter with a few dollars wagered. It is therefore no wonder that mahjong has gained such a worldwide appeal.