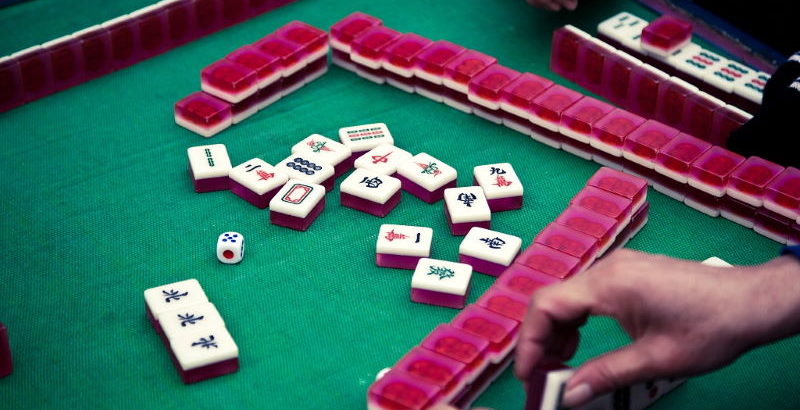 An extensive overview of Mahjong’s game rules and explanations of the key terminology used.

To start a game of Mahjong, depending on the version of Mahjong being played, each player is dealt either 13 or 16 tiles.

A ‘turn’ in Mahjong involves a player drawing a tile from the wall (or draw pile) and then placing it in his or her hand. The player then discards a tile onto the table. This signals the end of his or her turn, prompting the player to the right to make his or her move.

As a form of courtesy, each player is encouraged to announce loudly the name of the tile being discarded. Many variations require that discarded tiles be placed in an orderly fashion in front of the player, while some require that these be placed face down.

During gameplay, the number of tiles maintained by each player should always be the same, ie. 13 or 16. A player must discard a tile after picking up one. Failure to do so rules that player effectively out of winning (since a winning combination could never be built with one extra tile or less), but he or she is obliged to continue until someone else wins.

When three players ditch the West tile, the fourth player will usually avoid discarding another West the following turn. That is caused by a superstition that, when all the players discard a West together, all players will die or be cursed with bad luck! Also, during the West Prevailing Wind Round, players will also avoid ditching the One Circle during the first move because One Circle in Chinese sounds like together.

Flower tiles, when dealt or drawn, must be immediately replaced by a tile from the dead wall, or if no dead wall exists, the back end of the wall. They are immediately exposed (placed in view on the table on front of the player’s tiles).

At the start of each round, where two or more players may have flower tiles, flower tiles are replaced starting with the dealer and moving to the right. Flower tiles may or may not have point value; and in some variations, possession of all the flower tiles wins the round regardless of the actual contents of the hand.

A feature of several variations, most notably American variations of Mahjong, is the notion of wild card or Joker tiles. They may be used as a substitute for any tile in a hand (or, in some variations, only tiles in melds). Depending on the variation, a player may replace a Joker tile that is part of an exposed meld belonging to any player with the tile it represents.

Joker tiles may or may not have an impact on scoring, depending on the variation. Some special hands may require the use of Joker tiles (for example, to represent a “fifth tile” of a certain suited or honor tile).

In American Mahjong, it is illegal to pass jokers during the Charleston.

When a player discards a tile, any other player may “call” or “bid” for it in order to complete a meld (a certain set of tiles) in his or her own hand. The disadvantage of doing this is that the player must now expose the completed meld to the other players, giving them an idea of what type of hand he or she is creating.

This also creates an element of strategy, as in many variations, discarding a tile that allows another player to win the game causes the discarding player to lose points (or pay the winner more in a game for money).

Most variants (again, with the notable exception of American Mahjong) allow three types of melds. When a meld is declared through a discard, the player must state the type of the meld to be declared and place the meld face-up. The player must then discard a tile, and play continues to the right. Because of this, turns may be skipped in the process.

A kong is a set of four identical tiles. Because all other melds contain three tiles, a Kong must be immediately exposed when explicitly declared. If the fourth tile is formed from a discard, it is said to be an exposed Kong. If all four tiles were formed in the hand, it is said to be a concealed Kong. In some forms of play, the outer two tiles of a concealed Kong are flipped to indicate its concealed status.

It is also possible to form an exposed Kong if the player has an exposed Pung and draws the fourth tile. In any case, a player must draw an extra tile from the back end of the wall (or from the dead wall, if it exists) and discard as normal. Play then continues to the right. Once a Kong is formed, it cannot be split up (say, if you wanted to instead use one tile as part of a Chow), and thus, it may be advantageous not to immediately declare a Kong.

A chow is a meld of three suited tiles in sequence. Unlike other melds, an exposed Chow may only be declared off the discard of the player on the left. The only exception is when the player needs that tile to form a chow to win. In this case, a chow can be declared at any 3 opponents’ turns.

American Mahjong does not have a formal chow (that is, you cannot declare chows), but some hands may require that similar sequences be constructed in the hand. Some American variations may also have the knitted sequence , where the three tiles are of three different suits. Sequences of higher length are usually not permissible (unless it forms more than one meld).

The pair, while not a meld (and thus, cannot be declared or formed with a discard), is the final component to the standard hand. It consists of any two identical tiles.

Note that American mahjong hands may have tile constructions that are not melds, such as “NEWS” (having one of each wind). As they are not melds, they cannot be formed off discards, and in some variations, cannot be constructed in part or in whole by Joker tiles.

When two or more players call for a discarded tile, a player taking the tile to win the hand has precedence over all others, followed by pong or kong declarations, and lastly chows. In American Mahjong, where it may be possible for two players needing the same tile for melds, the meld of a higher number of identical tiles takes precedence.

If two or more players call for a meld of the same precedence (or to win), the player closest to the right wins out (but the game may be declared an abortive draw if two or more players call a tile for the win, again depending on the variation). In particular, if a call to win overrides a call to form a kong, such a move is called robbing the Kong , and may give a scoring bonus.

There is generally an informal convention as to the amount of time allowed to make a call for a discarded tile before the next player takes their turn. In American Mahjong, this “window of opportunity” is explicitly stated in the rules, whereas in other variants, it is generally considered that when the next player’s turn starts (i.e. the tile leaves the wall), the opportunity has been lost.

Some variations of Mahjong, most notably Japanese variations, allow a player to declare riichi (sometimes known as reach as it is phonetically similar). A declaration of riichi is a promise that any tile drawn by the player is immediately discarded unless it constitutes a win.

If only the dead wall remains and no one has won, the round is drawn or “goulashed”. A new round begins, and depending on the variant, game wind may change. For example, in most playing circles in Singapore, if there is at least one Kong in the round by any player, the following player becomes the dealer for the next round. If there is no Kong, then the existing dealer remains as the dealer for the next round.

In Japanese Mahjong, abortive draws (draws where the game is declared drawn while tiles are available) are possible. They can be declared under the following conditions:

If, on a player’s first turn, and with no melds declared, a player has nine different terminal or honor tiles, the player may declare the round to be drawn (for example: ; but could also go for the nonstandard thirteen terminals hand as well).

If three players claim the same discard in order to win the round, the round is drawn.

If, on the first turn without any meld declarations, all four players discard the same wind tile, the hand is drawn.

If all four players declare riichi , the round is drawn.

A player wins the round by creating a standard mahjong hand, (in Western Classical variants, this is known as creating a Mahjong, and the process of winning is called going Mahjong ) which consists of a certain number of melds, four for 13-tile variations and five for 16-tile variations, and a pair.

Some variations may also require that winning hands be of some point value. Variations may also have special nonstandard hands that a player can make (in this sense, American Mahjong is a variant where only special hands exist).

Turns and rounds in Mahjong

If the dealer wins the game, they will stay as the dealer. Otherwise, the player to the right becomes dealer and the player’s wind becomes the Game Wind, in the sequence East-South-West-North.

After the wind returns to East (ie. each player has been the dealer), a round is complete and the Prevailing Wind will change, again in the sequence East-South-West-North. A full game of mahjong ends after 4 rounds, ie. when the North Prevailing Wind round is over. It is often regarded as an unlucky act to stop the gameplay at the West round, as West has a similar sound to death in Chinese.