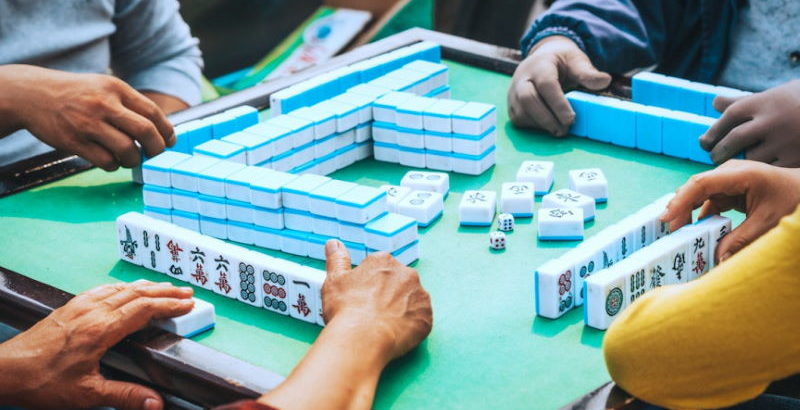 How to Read a Mahjong Tile Before it is Your Turn to Take it From the Wall!

And that is just what many of the more experienced Japanese mahjong players like to do in the course of a game – use feel the concealed face of the tile next to be taken from the wall with their thumbs! Yes, not a few seasoned hands have become competent at tile-reading by rubbing the indentations on tile-face with their thumbs.

Hours of Practice – Years of Wins

It takes hours of practice to get to the point where you can accurately distinguish each of the 34 different tile faces of a standard Japanese mahjong set with your thumb, and there seems to be little advantage in being able to do so.

It is a diverting party trick and it also adds some kudos to a player’s game if the player can pluck a tile from the wall, announce what it is and discard it without so much as glancing at it.

Mahjong is most exciting when played swiftly, so being able to read a tile without looking at it may be said to help the cause of speedy play, but apart from that there does not seem to be much practical profit in taking the trouble to learn the skill.

Take Advantage of The Situation – Thumb Reading in Mahjong

However, there is one case where a “thumb-reader” could glean some useful information about an opponent’s tile. Experienced mahjong players enjoy playing a fast-paced game so if one player hesitates before discarding a tile, the player to his right is likely to have reached for “his” tile on the end of the wall before the first player has discarded.

An experienced tile-reader places his thumb under the tile on the wall that he is about to take so that he can “read” it while waiting for his turn.

But then, when a discarded tile is claimed by another player as an open “Pon” the sequence of play is broken and the player who was waiting to take a tile – and who has now “read” it with his thumb – is passed over so the tile will most likely end up in another player’s hand. In that case the “thumb reader” will know what the tile is and will perhaps pay attention to where it is placed in the other player’s hand.

Cheating in Mahjong – Or Just Being Good?

Some people might object that such a practice is a form of cheating, but others counter that it is just part parcel of the Japanese approach to the game.

Of course that is not to say that the player who took the tile from the wall cannot resort to some deceptive tactics of his own by adding the tile to a random place in his hand while appearing to concentrate on placing it carefully into position so as to mislead the “thumb-reader” as to the construction of the hand.

Whatever your attitude towards players reading tiles with their thumbs may be, that it can be done at all shows you how sensitive the human thumb – or “oya-yubi” in Japanese – can be.