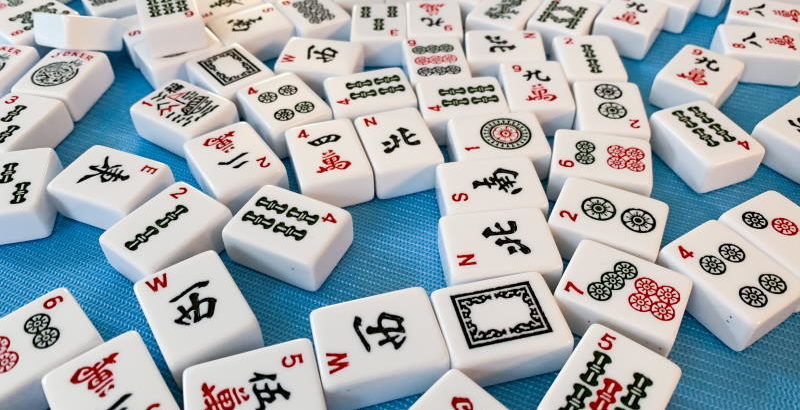 During a recent visit to my parent’s house I noticed a solid black briefcase on the kitchen table. I was curious as to what was inside. From it’s size, I thought it might be a laptop computer. My mom opened the briefcase to reveal several colorful tiles and game pieces. She informed me that it was her Mahjong tile set. She plays this ancient Chinese game weekly with her friends.

I am a big fan of playing Mahjong on the computer. I wondered if there were differences in the rules of my mom’s physical board game versus my computer game. There are many differences indeed, just as there are many versions of Mahjongg available.

The board version is an intense game of strategy, logic, and planning. My mom plays with three other players and has to work with a partner. The computer version I play is basic in comparison as I just try to match tiles together to remove them from the Mahjong tile pile.

What is the history of Mahjong? Mahjong is an ancient Chinese game that has a debatable origin. There are several theories as to who invented Mahjong. Some believe that Mahjong wasn’t invented until the middle of the 19th century. Believers of this origin maintain that Mahjong was based on current Chinese card and domino games.

Others believe that Confucius invented the game around 500 BC. Confucius was known as a great Chinese philosopher. The theory that he started Mahjong is based upon observation that game piece tiles and popularity relate to his philosophies and travels.

The Modernization of Mahjong

Mahjong made its way to the United States by the early 20th century. The game was translated into English. In 1937 the National Mah Jongg League was created. The rules of Mahjong were reviewed and revamped.

Who plays Mahjong? Mahjong has had a variety of players. The game requires four players and takes a few hours to play. Therefore, it is an ideal game for parties or special occasions. Players in China have played Mahjong to celebrate life events.

When Mahjong became popular in the United States it was primarily played by the Jewish population. Mahjong is now making its way across all backgrounds and age levels. The physical tile game is familiar to the older generation while the computerized version is bringing in the younger generation.

But How do You Play Mahjong?

How do you play Mahjong? Good question. The answer is that it depends. There are basic rules, but rules tend to vary based on the geographic region. The main goal of the game is to find matching tile suits and complete the 14 to 17 tile set. There are rule books that cover the Western version of the game.

The Mahjong game that my mom plays is closer to the ancient Chinese version then the computerized version I play. She enjoys the complexity and strategy of Mahjongg as well as the benefit of playing with her good friends.

Mahjong is an exciting game to try whether you want to play with friends or on your own. I find playing the computer versions both entertaining and relaxing. Many games websites, such as Grandmatrix.com, have several PC versions of Mahjong available.

The different versions are akin to the variety of Mahjong history, rules, and players around the world. Start your exploration of the Mahjongg variations by searching GrandMatrix under the keyword ‘Mahjong’ and you will be well on your way to fun!