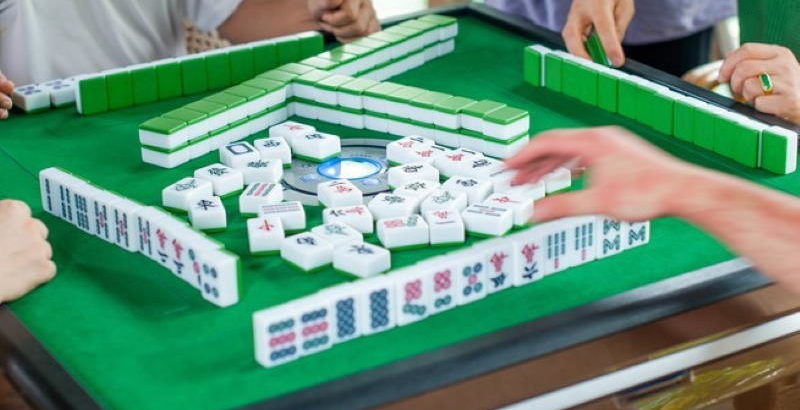 These are the steps for setting up a standard Hong Kong (or Singapore) Mahjong game board.

In some variations, the longer the dealer remains as the dealer, the higher the value of each hand.

The Prevailing Wind is always set to East when starting. It changes after the Game Wind has rotated around the board, that is, after each player has lost as the dealer.

A Mahjong set with Winds in play will usually include a separate Prevailing Wind marker (typically a die marked with the Wind characters in a holder) and a pointer that can be oriented towards the dealer to show Player Game Wind.

In sets with racks, a rack may be marked differently to denote the dealer. These winds are also significant as winds are often associated with a member of a Flower tile group; typically 1 with East, 2 with South, 3 with West, and 4 with North.

All tiles are placed face down and shuffled.

The dealing process that follows is ritualized and complex to prevent cheating. (But casual players, or players with Mahjong playing cards, may wish to simply shuffle well and deal out the tiles with fewer ceremonial procedures.)

Each player stacks a row of tiles two deep in front of him, the length of the row depending on the number of tiles in use:

The dealer then throws three dice and sums up the total. Counting counterclockwise so that the dealer is ‘1’, a player’s row is chosen. Starting at the right edge, ‘sum’ tiles are counted and shifted to the right.

The dealer now takes a block of 4 tiles to the left of the divide.

The board is now ready and new tiles will be taken from the wall where the dealing left off, proceeding clockwise. In some special cases, tiles are taken from the other end of the wall, commonly referred to as the back end of the wall. In some variations, a group of tiles at the back end, known as the dead wall, is reserved for this purpose instead. In such variations, the dead wall may be visually separated from the main wall, but it is not required.

The dealer can demand for a second Charleston, followed by an optional pass to the player across of one, two or three tiles. This is a distinctive feature of American Mahjong that may have been borrowed from card games.