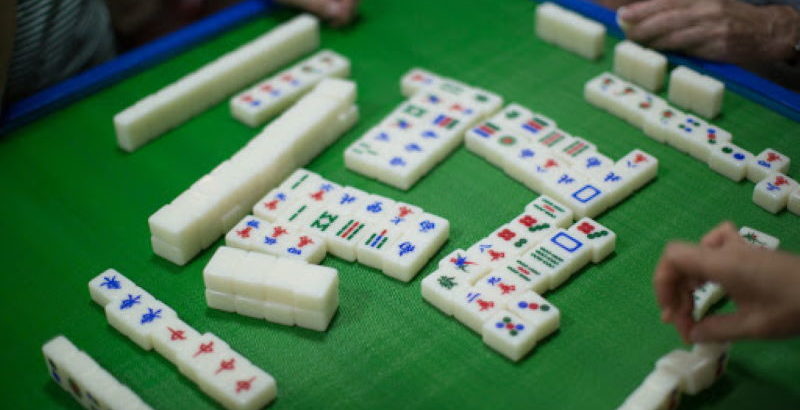 Learn How to Play Mahjong With This Beginners Guide!

Mahjong is a social game of skill, cunning strategy and to keep things interesting, a bit of luck. To get an understanding of the game, here are the basic rules of how to play mahjong. This is a description on the most common variation of mahjong play.

The game of mahjong is played by four players at a square table taking the positions of east, south, west, north. The players go through a ritual of using 144 mahjong tiles to stack a side of the “wall” two tiles high in front of each player. The game commences with each player having thirteen tiles taken from the wall of tiles. The player sitting on the eastern seat starts off with the “button” and draws another tile from the wall. This makes the amount of tiles in his hand fourteen. The object of the game is to have a winning hand that is composed of 4 sets of three tiles and a pair of tiles of the same suit. The 4 sets can be a combination of three of a kind or a series of three in the same suit. In other words a winning hand can be described as thus: 4 x 3 + 2 = 14.

The player who draws the tile can decide to keep it but must sacrifice another tile in his hand to throw away in the “courtyard” facing up on the table. Or, the player could have drawn the winning tile and won outright. Remember that a player must have thirteen tiles in his hand but win with fourteen.

After the tile has been discarded in the courtyard, any of the three other players can pick this tile up to make a “pung” or 3 of a kind. However, he must reveal this set in front of other players with the tiles facing up before him.

However, if no player can make a “pung” then the play continues to the person to the right of the player who last discarded a tile. If the tile helps his hand, he has the choice to pick up the tile to make a series of 3 in the same suit otherwise known as a “chow”. As well, he must reveal his intention to do so by putting his set of three tiles facing up for others to see. It is important to note that only a player sitting on the right of the person who just discarded the tile has the right to make a “chow”.

Either way, if a person inherits a tile through a pung or a chow, he must discard another tile to keep the hand at thirteen unless it was the tile to complete a winning hand. The play always continues to the right of the person who just discarded a last tile.

If no pung or chow can be made, then tiles are drawn from the wall. The hand ends either when someone has a winning hand or the number of tiles to draw from the wall run out.

As you can see, there’s an element of luck involved with drawing tiles for a good hand. However, with the discarding of tiles into the courtyard, there is also control of what your opponents can pick up from you to build their hand. A careful strategist can determine what tiles their opponents need by the pungs and chows revealed and what a person does NOT discard into the courtyard.

There are many other strategic elements in the game of mahjong. If the game intrigues you, there’s no better way to learn than to pick up a mahjong set and gather a few friends to discover the game for yourself.