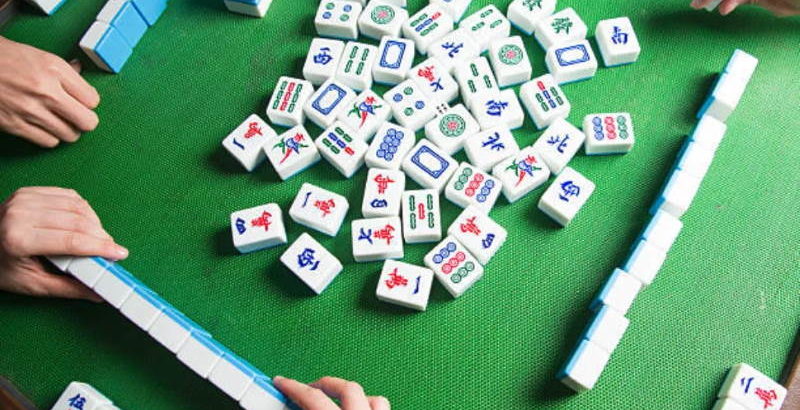 Mahjong is a very simple game to learn to play but difficult to master. Perhaps that is what makes the game appealing to a worldwide audience. It takes skill and strategy to assemble a winning hand while at the same time guess what your opponents hold and impede their progress to win at the same time.

What exactly constitutes a winning hand?

In the most common version of the mahjong game, a mahjong set of 144 tiles is used to play. Thirteen tiles are distributed to four players sitting in the position of east, south, west and north. Each player then takes turns drawing from what is leftover from the 144 tiles. A winning hand is made up of 4 melds of three tiles and a pair of tiles for “eyes”. This means that the winning hand is composed of fourteen tiles.

What is a meld?

The mahjong set is composed of 3 suits along with honor tiles and flower tiles. The three suits are dots, bamboos and characters. Each suit consists of a sequence of tiles numbered 1-9. Each number also exists in quadruplets. To make a meld, you need to have three tiles in a sequence of the same suit, or make three of a kind in the same suit.

For the honor tiles, they a broken down between the wind tiles and also the dragon tiles. The wind tiles are east, south, west and north. The dragon tiles are green, red and white. Each of these tiles is also in quadruplets but unlike the suits, you cannot make a meld of them in a sequence.

The flower tiles are used for bonus points but cannot be used to make a melds. If these tiles are drawn, the player puts the tiles in front of him. This serves as a reminder of the extra potential points he accrued should he win the hand and he redraws new tiles.

How do you play the game?

Now that there’s a basic understanding of what constitutes a winning hand: 4 melds of 3 tiles and a pair of the same tiles for a total of fourteen, it’s time to describe the sequence of play.

The game officially starts with the player sitting in the eastern spot. He starts off as the dealer with the privilege to be passed to each player accordingly unless the dealer actually wins the hand. If he does, he gets to be the dealer again.

The dealer draws first for a new tile from the “wall” leftover tiles stacked two tiles high in front of each player. He can choose to keep or discard the tile but always keeping in mind that he needs to have thirteen tiles in his hand. Or if he achieves a winning hand of fourteen he can declare it immediately and lay his hand out for all to see.

In the meantime, when a card is discarded, it is placed face up on the table. Any other players can “pung”, which is a declaration of three of a kind, and pick that tile up. In doing so, he needs to lay out his three of a kind before him. He also needs to discard a tile since he acquired an extra tile for his pung or else he risks his hand having one tile too many.

A pung is one way of advancing a hand for the required four melds with the external help of your opponents. Another way to do it is with a “chow”. A chow is a sequence of three tiles in the same suit. You can only make a chow with the discarded tile of someone to your left. Again, you need to place the chow before you and replace the tile you’re taking with one from your own hand.

The play always continues to the right of the person who last discarded the tile, whether it came from a pung, chow, or draw.

With the help from your opponents or your luck of the draw, a winning hand is constructed. The winning tile can come from anybody to finalize the 4 melds of three and the pair for eyes to total fourteen tiles.

As you can see, the concept of mahjong is simple enough but to be a good player, you need to be aware of your tiles, as well as how others are constructing their winning hands. What better way to learn this fascinating game than to start playing!

Other fun games to play!