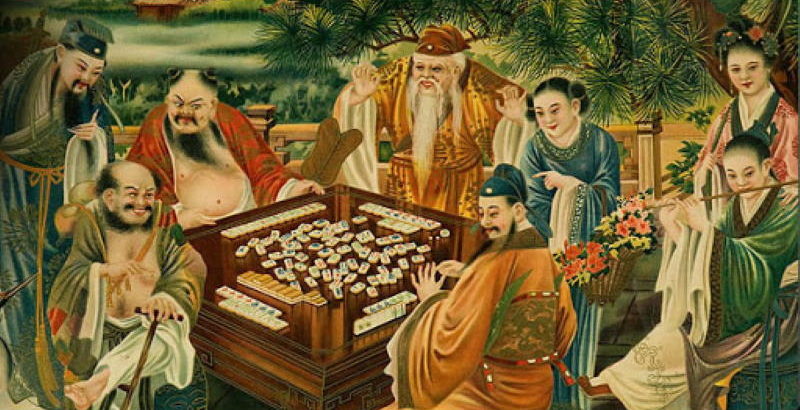 A comprehensive summary of the history of the game of Mahjong.

One of the myths regarding the origin of Mahjong suggests that Confucius, the great Chinese philosopher, developed the game about 500 BC. According to this myth, the appearance of the game in various Chinese provinces coincides with Confucius’ travels at the time he was teaching his new doctrines. The three dragon (Cardinal) tiles are said to coincide with the three Cardinal virtues bequeathed by Confucius; the Red dragon for Benevolence, the Green for Sincerity, and the white Filial Piety. Also, the myth has it that Confucius was fond of birds, which would explain the name “Mahjong” (sparrow).

However, there is little or no evidence of Mahjong’s existence prior to the Taiping era, which effectively eliminates Confucius as a likely inventor.

Was Mahjong Originally a Card Game?

Another theory implies the game was developed from existing Chinese card and domino games, sometime around 1850. Some historians believe it was based on a Chinese card game Madiao, dating back to the early Ming dynasty. This game was played with 40 paper cards. These forty cards, numbered 1 to 9 in four different suits along with four extra flower cards, are quite similar to the numbering of Mahjong tiles today.

There is great debate about to whom the creation of the game should be attributed. One theory is that Chinese army officers serving during the Tai Ping Rebellion created the game to pass the time. Another theory is that a noble living in the Shanghai area created the game between 1870 and 1875. Others believe that two brothers created Mahjong around 1850 in the city of Ningpo from the earlier game of Madiao.

Banning of Mahjong in China

Mahjong was banned in China in 1949, when the People’s Republic of China was founded. The new Communist government forbade any gambling activities, which were regarded as symbols of capitalist corruption.

After the Cultural Revolution, the game was revived, and once again Mahjong became one of the favorite pastimes of the Chinese people.

Mahjong in the western world

In 1895, Stewart Culin, an American anthropologist, wrote a paper in which Mahjong was mentioned. This is the first known written account of Mahjong in any language other than Chinese. By 1910, there were written accounts in many languages including French and Japanese.

The game was imported from China to America in the 1920s and became a sensation, especially amongst women. Mahjong Nights were popular, with players decorating rooms in Chinese style and dressing in Chinese costume. Several hit songs were recorded during the mahjong fad, most notably “Since Ma is Playing Mah Jong” by Eddie Cantor.

An important English writing from the time was Joseph Park Babcock’s “Rules of Mah-Jongg”, which, simplified in 1920, was simply known as the “red book”. This version of the rules was widely adopted in America and took on a number of trademarked names, such as Pung Chow or the Game of Thousand Intelligences. Many of Babcock’s simplifications were abandoned when the 1920s fad died out.

By the 1930s, many revisions of the rules had developed that were substantially different from Babcock’s classical version. Standardization came eventually with the formation of the National Mah Jongg League in 1937, along with the first American mahjong rulebook, “Maajh: The American Version of the Ancient Chinese Game”.

While mahjong was accepted by U.S. players of all racial backgrounds during the Babcock era, many consider the modern American version a Jewish game as many American mahjong players are of Jewish descent. Also, the NMJL was founded by Jewish players and at the time considered a Jewish organization.

British author Alan D. Millington revived the Chinese Classical game of the 1920s with his book, “The Complete Book of Mah-jongg” (1977). This handbook includes a formal rules set for the game. Many players in Western countries consider Millington’s work authoritative.

Today, the popularity and demographic of players of Mahjong differs greatly from country to country. There are also many governing bodies, which often host exhibition games and tournaments.

In Japan, there is a traditional emphasis on gambling and the typical player is male. Many devotees there believe the game is losing popularity and have taken efforts to revive it. In addition, Japanese video arcades have introduced Mahjong arcade machines that can be connected to others over the internet, as well as video games that allow a victorious player to view pictures of women in varying stages of undress.

In 1998 the China State Sports Commission, in the interest of changing mahjong from an illegal gambling game to an approved ‘healthy sport’, with the principles of no gambling, no drinking and no smoking.

They published a new set of rules, now generally referred to as Chinese Official rules or International Tournament rules.

In international tournaments, players are often grouped in teams to emphasize that mahjong from now on is considered a sport.

The new rules are highly pattern-based. The rulebook contains 81 combinations, based on patterns and scoring elements popular in both classic and modern regional Chinese variants.

Some table practices of Japan have also been adopted. Points for flower tiles (each flower is worth 1 point) may not be added until the player has scored 8 points. The winner of a game receives the score from the player who discard the winning tile, plus 8 basic points from each player; in the case of zimo (self drawn win), he receives the value of this round plus 8 points from all players.

The new rules were used in an international tournament first in Tokyo, where in 2002 the first World Championship in Mahjong was organized by the Mahjong Museum, the Japan Mahjong Organizing Committee and the city council of Ningbo, China, the town where it is believed mahjong most likely originated. One hundred players participated, mainly from Japan and China, but also from Europe and the United States. Miss Mai Hatsune from Japan became the first world champion. The following year saw the first annual China Majiang Championship, held in Hainan. The next two annual tournaments were held in Hong Kong and Beijing. Most players were Chinese, but players from other nations attended as well.

In 2005, in the Netherlands, the first Open European Mahjong Championship was held, with 108 players. The first prize was won by Masato Chiba from Japan. The second European championship is in Copenhagen, Denmark in 2007.

Critics say that these new rules are unlikely to achieve great popularity outside of tournaments. They argue that regional versions are too well-entrenched, while the international rules use many unfamiliar patterns. The new mahjong’s advocates claim that it meant to be a standard for international events, not to replace existing variations.