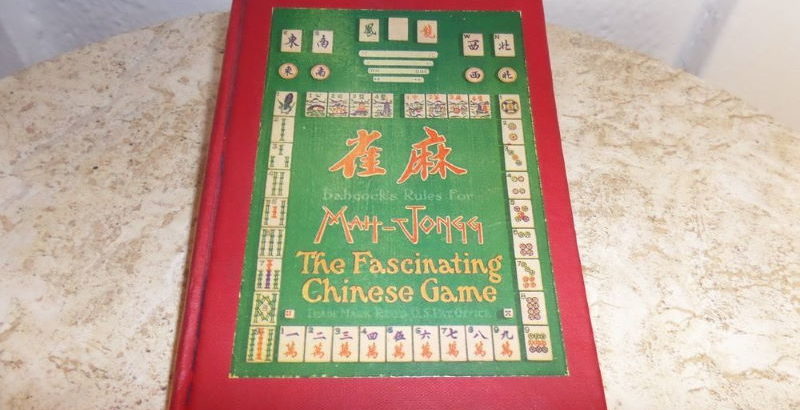 What’s the Best Book to Read if you’re Looking to Learn the Game of Mahjong, or Improve Your Play?

There are many many books about mahjong (mah jong, mah-jongg) written for Chinese and Japanese audiences, but relatively few in English. The Mahjong Guide has carried out a survey of the books that are recommended by experienced players to their fellow players.

These are the 15 most frequently recommended English language books about mahjong:

by Eleanor Noss Whitney (orig. 1968 but reprinted many times since).

This classic book dates back to the 1960’s. For beginners and more experienced players wanting to improve their strategy. Gives an introduction to the many variations of the rules. Especially good on the Japanese and US versions. Includes exercises to help you learn and score cards that can be copied.

2.) The Game of Mah Jong Illustrated

by Patricia A. Thompson and Betty Maloney (1999)

Probably the best book for mahjong novices wanting to learn how to play. A clear and straightforward manual with helpful illustrations. Goes through all aspects of play from setting up and scoring to playing special hands.

This highly regarded expert covers rules, strategy, etiquette and also the history of US and Chinese mah-jongg.  Particularly good for those new to the game.

4.) Mah-jongg: From Shanghai to Miami Beach

by Anita Luu and Christi Cavallaro (2005)

A lovely book that immerses you in the history culture of the game, with clear explanations of the rules, beautiful photos and even recipes to eat while you play!

5.) The Book of Mah jong: An Illustrated Guide

Amy Lo’s book is about authentic Chinese mahjong, with information about  Cantonese, Shanghai, Taiwanese and 12-tile versions. Aimed at all levels of player. Some of the explanations are a little difficult to follow but it’s a very useful reference none the less.

6.) The complete book of Mah-Jongg

Very scholarly, comprehensive but accessible book on the classical Chinese version of the game and its cultural background. Millington compares mah-jongg to other skill games and looks at the rise and influence of other versions of the game. Clear explanations of the rules of Chinese mah-jongg, though not a huge amount on strategy.

7.) Beginner’s Guide to American Mah Jongg: How to Play the Game & Win

For those who want to play American style mah jongg, this book provides clear step by step guidance on how to play the official National Mahjong League rules.

by Patricia A. Thompson and Betty Maloney (1993)

9.) Mah Jong, Anyone?: A Manual of Western Play

About the US and other western variations of mah jong. Takes the basic rules, scoring, penalties and bonuses and shows how they are adapted in different versions.  Helps you develop some basic strategies that can be applied whatever version you are playing.

Aimed at newcomers to the traditional Chinese version of mah-jong. Li teaches you how to play and build strategies, using exercises and logic, and explains the cultural significance and etiquette surrounding the game. And most importantly he will convince you of what an enjoyable and sociable pastime this is!